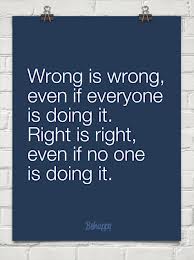 Well, here it is — The Post.  Now, for my part I promise you it is the only one of its kind.  I’m not going to keep harping on this.  But I’m also going to speak very clearly and forcefully right now.

This post is about stealing.  Specifically, illegal steaming and downloading.

For the record, it’s not because I’ve had anything stolen from me or because I am religious.  I haven’t and I’m not.  This is about right and wrong.

Now, I’m sympathetic to how we got here.  Technology has come on so fast (when I was a kid in the 80s there was no internet — gasp!).  And in the ‘old days’ some sharing was allowed, or even encouraged.  You lent out your book or record to a friend so they could experience the same joy you did.  And then there were used book or record stores where you could sell or trade goods and even though the original creators didn’t get money, you were only selling your single copy and others had to be okay with buying used goods.

I also understand that the average household income has been going down since the 70s and corporate profits have been going up.

And lastly, I understand that there’s a certain kind entrepreneurial spirit that is sometimes at play.  I was recently talking to some self-publishing friends and they mentioned you could use Paypal when people bought your books, but to the sure to mark it as a ‘gift of money’ instead of a ‘payment for goods sold’ because Paypal will charge you a fee for the latter.  Now these are good people who didn’t think about it as lying or stealing, but Paypal is a business, and not paying them what they ask when you’re using their service to further your business is stealing.  And to their credit, when we talked about it, my friends agreed.  But as someone who has made signs from trash and done my own editing, I fully understand the ‘smart way’ thinking that led them to that place.

Now the fun part, where I tell you you rock and to stop making your grandmother cry

Fat Tony: Bart, is it wrong to steal a loaf of bread to feed your starving family?

Fat Tony: Well, suppose you got a large starving family. Is it wrong to steal a truckload of bread to feed them?

— The Simpsons, ‘Bart the Murderer’ written by John Swartzwelder

Ah, the slippery slope of rationalization.  Now, I know you are a good person.  You have people you love, things that mean something to you.  You have a heart.  And as a good person you are going to have to give up stealing.  There is no justification.  People I’ve talked to who illegally download are almost always trying to justify it.  If you’re a thief, a criminal, and don’t mind that — at least you’re honest.  This post is for everyone who still believes stealing online is different than stuffing a CD down your pants and sneaking past the security guard at the local mall.

Below are the excuses / rationalzations I’ve heard:

The artists don’t get the money anyway.  Why should I give my money to a big corporation?

First of all, because it’s their property.  The same as a physical CD, they spent the time and money, took the risk, and produced a product — you take that product without paying, then you’re a thief.  Secondly, because the artists do get some of it.  They wouldn’t be doing this otherwise.  And they are getting enough to follow their dreams, and make more music, TV shows, and games you love.  And if their product doesn’t make money, guess what?  Your favorite artist would have to go and work at McDonalds.

The artists are millionaires.  And I don’t like some of them.  They don’t need my eight bucks.

First of all, that’s still their work and effort you’re enjoying and they do deserve compensation.  And a lot of artists go through years and years of struggle to even get out there on the national stage; so just because you don’t think they deserve it doesn’t mean you get be cheap.  You would seem a millionaire to many in third world countries — can they come take your TV and wallet because you don’t deserve it?  You worked for your money and you should get to use it as you see fit — and so should every band, singer, game creator, writer, and TV producer.

Singers can do live shows for money.

Uh . . .  This one blows my mind every time.  Yes, and you can come listen to them.  But what you are suggesting is the end of every entertainment medium you love.  If illegal downloading was wide enough spread (if I couldn’t support the people you steal from) then there would be no cable TV (Do you know how much those HBO shows cost?), no professional quality CDs, no New York Times Bestsellers.  If event venues and artists who don’t mind working two jobs and releasing free content to you were the whole of entertainment, it would be a very sad shell of itself.  Your illegal downloading is killing the shows and singers you love most.

I just wanted to try it.  And after ten album listens (40 gameplay hours, etc) I didn’t like it that much.

Oh no, you don’t.  You got to experience a thing — that’s what you’re paying for.  Don’t think you’d like that album?  Then wait till it’s on Spotify, or listen to the singles on Youtube.  Rent that game instead of buying it, or only buy six-month-old games that have tons of reviews, walkthoughs, and are now half price.

I’m not stealing a physical item — it costs them nothing.

All the effort that went into creating something is not nothing.  For a CD — the case, burned CD, and paper cost about 50 cents.  That’s all.  The thousands and sometimes millions, go into the music itself — and that’s what you are stealing.  The same way when you gave a physical copy of a book to your buddy, that was maybe one sale they would miss out on as you shared your copy — but if you ‘share’ online you are taking away thousands, millions of sales.  If the artist or company made it, then they deserve payment — whether or not it’s in a 20 cent plastic jewel case.  If you wouldn’t steal from a store, you shouldn’t steal online.  It’s like that old joke —

He: Would you sleep with any man for a million dollars?
She: Well…I guess so.
He: How about sleeping with me for ten dollars?
She: (angrily) What do you think I am?
He: Oh, I know what you are.  Now we are only haggling over the price.

I don’t have any money.

I feel for you.  But in this day and age most people reading this have internet access.  And even if you don’t, there are a ton of events, libraries, and other public freebies.  And online you have Spotify, Pandora, Hulu, Youtube, and TONS of songs, shows, and games put up for free by their creators.  Maybe you are buying too much; try buying half as many things and wait for the ones you want most, or wait for price drops and sales.  Just because it’s new doesn’t mean it’s any better than the best of last year.

THERE IS A BRIGHT SHINY FUTURE OF PLENTY AHEAD OF YOU

You are a wonderful person.  You have big dreams and you want to live in a world of abundance.  That means supporting others’ dreams and works and helping make the world a more just, happier place.  You can do it.  Just stop stealing today (your grandmother would be proud) and start supporting the dreamers, the doers, and the creative freaks.  Because behind everything you steal, there’s a person like me, a nice, hardworking creator who only wants to make a living while entertaining the pants off you.