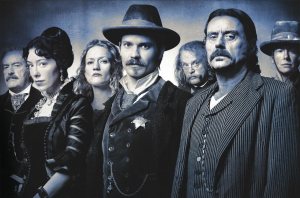 I love everything about writing.  I love words, I love plots, but above all — I love characters.

Now, the picture above may be cheating a little bit, because some (or most) of the characters on Deadwood were based on real people.  But that doesn’t matter.  I defy you to find a more well-rounded, intriguing, and original group (I’m sure there’s many, I just love Deadwood!).  And whether you’re making up characters from scratch (like I do) or are inspired to write a secret alt life for Henry VIII, in the end your characters belong to you (not history) and it’s up to you to bring them to life.  Now for me, I’ve been doing this long enough that they really do come alive and talk by themselves after you’ve muddled around with them in your brain for weeks and months and years.  But that doesn’t mean there aren’t some important ideas to help you long your way —

How to Build a Living, Breathing Character

Especially in fantasy, writers imagine a world where everyone rides pegasi and communicates through music.  Great, but then they imagine their hero is a bounty hunter, a fighting master, and secret heir to the throne.  And then they stop, at least character-wise, as if, ‘Hey, it’s not real life — we got pegasi here for gosh sakes! — do you want him to be an accountant?’  No, but I want his life to feel as real as your accountant’s.  I don’t mind if he’s all these things if I believe this is his real life, day to day.  What’s his family like?  What does he want out of life in the future?  Has he ever killed a man?  Or bruised his little pinky fighting?  It may be crazy to us, but it’s his normalcy.

Speaking of that family, why not give him one?  The orphan/loner will always be popular, but people can really connect to him having a family, no make how close or distant they are.  Give him overdue bills, break his nose (Chinatown), make him a secret writer of terrible poetry.  You may want clean lines in your story, but consider mussing up your hero a little bit — they’ll be the better for it.

For me, music is the number one way I build character.  I’ll hear a song that makes me think of a scene, or a character, and then I add that song to a playlist of the novel.  Pinterest is another way to start building up a character.  Great TVs, movies, and books (and games!) also will inspire your characters, abet indirectly.

Some writers like to interview their characters.  I don’t do that but I often like to play out scenes (scenes I may or may not use) just to hear what they say, and what they do when backed into a corner.  In the beginning, you’ll feel like you’re just putting words in their mouths but then one day they’ll say something wrong, unexpected, and even offensive. STOP.  Take a deep breath.  And then let them do the thing you didn’t want them to do — this is the beginning of a great character.

Shrek: For your information, there’s a lot more to ogres than people think.

[holds up an onion, which Donkey sniffs]

Donkey: Oh, they make you cry?

Donkey: Oh, you leave ’em out in the sun, they get all brown, start sproutin’ little white hairs…

Donkey: Oh, you both have LAYERS. Oh. You know, not everybody like onions. What about cake? Everybody loves cake!

Shrek: I don’t care what everyone else likes! Ogres are not like cakes.

Donkey: You know what ELSE everybody likes? Parfaits! Have you ever met a person, you say, “Let’s get some parfait,” they say, “Hell no, I don’t like no parfait”? Parfaits are delicious!

Shrek: NO! You dense, irritating, miniature beast of burden! Ogres are like onions! End of story! Bye-bye! See ya later.

Donkey: Parfait’s gotta be the most delicious thing on the whole damn planet!

Now, I included it because I was going the say that great characters have layers, but I think it’s actually a great example of character in of itself.  These kinds of heroes do come out of looking deeper at your characters — if Shrek was just a mean orge, he might not be funny, or introspective.  And donkey may be a dense, irritating, miniature beast of burden, but he also has a very cheery outlook on life and is a hero in the making himself.

But how do you get there?  I don’t think there’s any short-cuts (sorry!), nor magic tricks, but luckily YOU don’t need them.  You’ve already been researching the human experience on Earth for many years — just think about what you’d do in that character’s place, when confronted by that criminal, or when kissed by that boy.  Actor Rupert Graves when discussing Maurice said that actors play a game called ‘I’m Not ____, But If I Was …’  Do that.  ‘I’m not Sherlock, but if I was …’  ‘I’m not gay, but if I was …’

In the end, I think the two sins that cause most of the character-related grief in this world are just not thinking very long about your characters and making them (never MAKE them do anything) act in ways that further your story but don’t seem related to anything you or your friends would ever do.  Characters are supposed to be larger than life sometimes, but it is Indiana Jone’s fear of snakes — and love for his father — that makes him a living, breathing character.